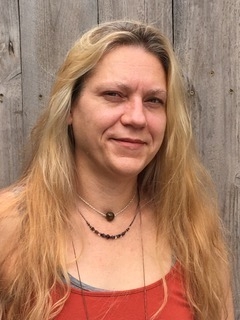 Holly is a costume designer, textile artist and photographer.  She has been a professional costume designer for over 20 years.  Her work has appeared on the stages of Williamston Theatre, Stormfield Theatre, BoarsHead Theatre, Riverwalk Theatre, OHS, Peppermint Creek Theatre Company and MSU to name a few.  Some favorite shows include, an all tie-dyed production of The Comedy of Errors (BHT 2005) for which she received a Thespie Award for best costume design from the Lansing State Journal, The Taming (WT 2017) which won a Wilde Award for best costume design and Doublewide (WT 2018) which marked her 100th professional show as a costume designer.  Holly is a graduate of Sienna Heights University where she studied fashion merchandising, textile art and philosophy.  She has also studied historic costume and textiles at MSU and website design and computer programming at LCC.  Holly has enjoyed being a part of the Williamston Theatre team as the Box Office Assistant for the past decade or so as well.

The Hat Box
These Mortal Hosts
The Safe House
The Gin Game
To Quiet The Quiet
Out of Orbit
Doublewide
The Taming
Murder For Two
1984
The Nerd
Summer Retreat
Rounding Third (2015)
The Best Brothers
Miracle on South Division Street
Over the River and Through the Woods
10:53
The Usual: A Love Story
And The Creek Don't Rise
Oedipus
Blue Door

The Taming: Wilde Award for Best Costumes, Holly Iler
Support for the Williamston Theatre Comes From